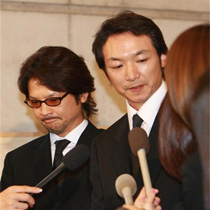 Condolences poured in from all over the Japanese show business world following the recent death of actor Ogata Ken at the age of 71 (earlier story). A small and private Buddhist funeral was held yesterday in Tokyo. His sons Kanta (photo right) and Naoto (photo right) gave a brief press conference afterwards and spoke of their father as an “immeasurably huge presence” in their lives, a man who was both “cool and warm.” They revealed that their father had been battling liver cancer for five years, though his continued dedication to his craft and busy schedule meant that few people outside his family knew of it. Even actor Tsugawa Masahiko (68), a close friend of almost 40 years, was shocked to learn of the cancer and rushed to his friend’s bedside. Ogata was hospitalized on October 4 when his condition suddenly deteriorated following a ruptured liver. He spent his last few hours with his family and Tsugawa, who described the closing act of his friend’s life: “For the last ten minutes he glared into space like a kabuki actor, as his breath grew shallower. He fought right to the end, gave everything he had. It was a wonderful end, worthy of a great star.” Ogata’s sons said their mother Norie (71) was still distraught and had cried constantly for the last three days. Ogata had been working in his last few weeks, and attended a post-production event for a recently finished Fuji TV drama series on September 30. Producer Nakamura Toshio said he had no idea Ogata’s illness and above all remembered his warm smile.