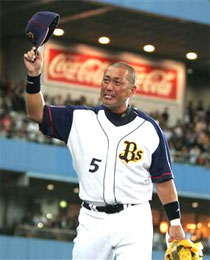 One of Japan’s most popular baseball stars brought his career to an end last night. Slugger Kiyohara Kazuhiro (41) played his final game for the Orix Buffaloes and gave a tearful farewell speech during a ceremony after the game. A star of the Seibu Lions during their 1990s reign, Kiyohara was already a star before he joined pro baseball. He and ace pitcher Kuwata Masumi were the legendary high school baseball pair known as the “K-K Combi.” They took PL Gakuen high school to the final of the annual Koshien tournament four years running, winning twice. Kiyohara had hoped they would play together for the Yomiuri Giants, but in the draft only Kuwata ended up on Japan’s most popular team. Kiyohara was signed by the Lions in the rival Pacific League, where he lived up to his huge potential for a decade. His talent and good looks won him many fans of both sexes, and he said that the only reason he became a pro baseball player was to attract beautiful women and afford fast cars. He became a free agent in 1997 and was reunited with Kuwata on the Giants. But plagued by injuries, he put on weight and, with his perennial tan and piercings, began to look more like a gangster than a sports idol. He spent eight declining years with the equally declining Giants before moving to the Buffaloes in 2006. With many celebrity friends, it’s likely that he’ll move to showbiz rather than get into coaching or management.

• Veteran actor Takarada Akira (74) was caught speeding on a Tokyo expressway during the summer, it was revealed yesterday. He was doing 124km/h on the 80km/h Metropolitan Expressway on the afternoon of July 29 when his license plate and face were recorded by a speed camera. He appeared at a police station on September 29.

• Actress Hirayama Aya (24) has dropped out of her scheduled first theater role due to acute pharyngitis. She was due to appear from October 8 in a stage production of “Bentler, Bentler, Bentler.” The show was written by Goto Hirohito, whose “Midsummer Carol” was the basis for the currently showing fantasy movie “Paco to Maho no Ehon,” and it is being performed by his theatrical troupe, Piper. Hirayama’s guest role will be played by actress Suzuki Ranran (33).

• Actor Masi Oka (33) was back in Japan yesterday to promote the movie “Get Smart.” His breakthrough in the U.S. drama series “Heroes” has made him a big name there. But at home he still gets starstruck and was visibly excited about the prospect of appearing with comedy duo Ninety Nine (profile) on the “All Night Nippon” show late last night.

• Upcoming British singer Duffy (24) played her first show in Japan yesterday. She performed for 900 fans at the Ebisu Liquid Room in Tokyo in support of her debut album “Rockferry.”