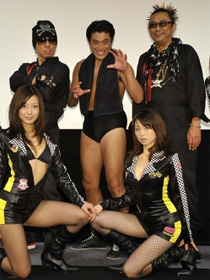 The comic/soul duo The Bubblegum Brothers are making a comeback. The pair best known for their 1991 mega-hit “Won’t Be Long,” one of the anthems of the economic bubble years, appeared together yesterday for the first time in years. Brother Tom (52, photo back right), Brother Korn (52, photo back left) and impersonator Antokino Inoki (35) attended a PR event for the Hollywood movie “Death Race.” Brother Korn – real name Kondo Nobuaki – revealed for the first time that he underwent transplant surgery three years ago, receiving a kidney from his wife. The following year Brother Tom was hospitalized following a stroke and both men have been working a lot less since their time in hospital. They say their new single is dedicated to other men who may be facing similar struggles that come with middle age. “Daddy’s Party Night” is scheduled for release on December 3. Both men’s early careers were a mix of music and comedy and they were a natural fit when they teamed up in 1983, releasing their debut single in 1985. But they only put out a handful of singles over the course of a decade, the last one being “Get Good Get God,” the Japanese theme song for the 1994 soccer World Cup. They split up as a duo in 1996 and in recent years have appeared mainly as minor TV celebrities. Tom (Koyanagi Tomu, or Thomas Akiona Akima Jr.) was born on a U.S. military base to a Hawaiian father and Japanese mother. “Death Race,” a Paul WS Anderson-directed remake of the 1975 classic “Death Race 2000,” opens in Japan on November 29.

• Top art director Kimura Takeo has been recognized by the Guinness Book of World Records for his debut as a full-length feature film director at the ripe old age of 90. Kimura wrote and directed “Yume no Manimani,” which is currently in theaters. Kimura joined Nikkatsu Studios in 1941 and has served as art director on over two hundred films, including such modern classics as “Tampopo” (Itami Juzo, 1986) and “Pistol Opera” (Suzuki Seijun, 2001)