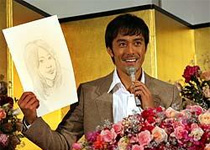 Sorry ladies, but one of Japan’s most eligible celebrity bachelors is now off the market. Actor Abe Hiroshi (43) held a press conference at TV Asahi in Tokyo yesterday to announce his engagement. His fiancee is 15 years younger and not in show business. They first met about five years ago but only started going out in the spring of 2006. They’ve been living together for about the last month in the capital and plan to register their marriage in the near future. They have plans for a wedding ceremony next spring. Ironically one of Abe’s most popular leading roles was in last year’s Fuji TV comedy drama “Kekkon Dekinai Otoko”, in which he played a 40-something man who was unable to get married. Abe became a fashion magazine model while studying at Chuo University. He made his movie debut in 1987 and had his first TV drama leading role in 1990. His hits include the dramas “Trick” and “Dragon Zakura” and movies in the “Hokuto no Ken” (Fist of the North Star) series. At 1.89m he is quite a bit taller than the average Japanese guy.

• Sakai Kaoruko (29), the wife of Globe member Marc Panther (37), was sentenced for drug use yesterday. At the Tokyo District Court she was given a 14-month prison sentence, suspended for three years, for use of ecstasy at her Tokyo home in early September. In handing down the sentence, the judge said Sakai showed a lack of awareness regarding drugs and could be likely to repeat the offense.

• Veteran actor Chiba Shinichi (68), better know abroad as martial arts star Sonny Chiba, revealed this week that he plans to start directing movies. He will direct under the name of Wachinaga Rindo, while he’ll change his acting name to JJ Sonny, the nickname he has in the U.S.