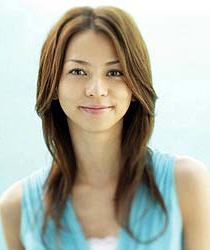 Karina (23) is the latest popular fashion model to establish herself as an actress. She has landed the lead role in next year’s TBS drama “Daisuki!!” It is based on the girl’s manga “Be-Love”, by Aimoto Mizuho, which runs in the comic of the same name. Karina’s role sounds a lot more challenging than the usual comic fluff that glamorous actresses are given. She will play Fukuhara Yuzu, a resident at a home for the mentally disabled, who though she only has a mental age of eight, falls in love with another resident and becomes pregnant. He later dies in a traffic accident, but she has their baby and decides to raise the child herself. The drama will air on Thursday nights from January 17.

• A lot is being read into the return to work of talento Hano Aki (39) after a gap of seven years. She took part in the recording of a variety show yesterday and called it “good rehabilitation.” She put her career on hold when she married kyogen performer Izumi Motoya (33) in 2002. She was six months pregnant at the time and they now have two children. But she moved back to her family’s home in September, taking the children. Izumi, his domineering mother Setsuko, and his two sisters have maintained the line that Hano has been simply nursing her sick mother for the last few weeks. But when a married female talento returns to work, it’s usually seen as a sign of marital or financial trouble. A divorce announcement is now seen as the next step, but Setsuko won’t be happy about Izumi not having an heir to carry on the family tradition.