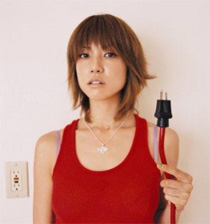 Singer Hitomi (31) chose a strange date to announce her impending divorce from her husband of five years. She and design company employee “U-san” (38), formerly a rapper with the hip hop group Gasboys, married on November 2 2002, so her announcement on her blog yesterday came on their 5th anniversary. Sources say they have not yet filed for divorce but plan to do so soon. They have no children. Hitomi is with the Avex record label, who refused to comment on what they said was a private matter. She started out as a magazine model and made her CD debut under producer Komuro Tetsuya in 1994. Her discography includes eight original albums and more than 30 singles.

• Miike Takashi’s 2000 film “Audition” was the only Japanese feature to be included in Time magazine’s recent Top 25 horror films of all time. The listing is probably not one all horror fans will take too seriously (it includes Disney’s 1942 classic “Bambi”) but it would have been unforgivable not to have included at least one Japanese movie. Especially considering how influential Japanese horror has been in Hollywood in the last few years.