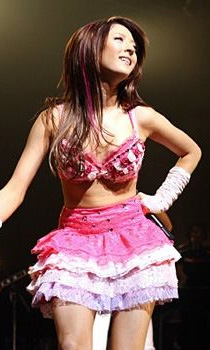 As predicted here back in January, Leah Dizon’s career in Japan is steamrolling ahead. The 21-year-old American pin-up girl/singer performed her first solo concert last night at O-East in Shibuya, one of the most popular districts for Tokyo’s youth. The 90-minute set included 16 songs, several sexy outfits and minimal chat, though her Japanese skills have noticeably improved over the last year. Cosplay is a big part of her act, and yesterday’s concert ended with her wearing the yellow cap, pleated miniskirt and backpack of a typical Japanese elementary school student. She only came to Japan for the first time in 2006 but already had a fan base here, largely from the cosplay photos she posted on her blog. 2006 saw the release of a best-selling photo book and Dizon’s self-promotion included a home-made video of her singing an Amuro Namie hit. The whole thing went so smoothly that some started to ask whether she was really a Japanese after all. The half French-American, half Chinese-Philippina was born in Las Vegas and raised in Los Angeles. She made her official recording debut in February and has released three singles and an album. Sources say she has a good chance of being invited to appear on NHK’s “Kohaku Uta Gassen” on New Year’s Eve and maybe even being named Best Newcomer at the Japan Record Awards. Named after the Star Wars character Princess Leah, she is often referred to as the “gravurekai no kurofune” or “Black Ship of the Pin-up World”, a reference to the Black Ships of Admiral William Perry that helped end Japan’s centuries of isolation in the mid-1850s.