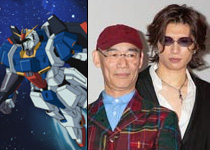 Singer and actor Gackt is to release a full album of songs from the hugely popular “Kidou Senshi Gundam” (Mobile Suit Gundam) anime series. He chose yesterday to make the announcement in honor of the 66th birthday of Gundam director Tomino Yoshiyuki. A longtime fan of the series (he’s even said to have memorized most of the lines by the main characters), Gackt has recorded songs for the trilogy of “Kidou Senshi Z Gundam” movies released over the last couple of years. In addition to those five tracks, the album “0079-0088” will include three covers of tunes from the original 1981-82 “Kidou Senshi Gundam” movie series (“Suna no Jujika”, “Ai Senshi”, and “Meguriai”). The album is scheduled to go on sale December 19 and a DVD box set of the original series will be released on December 21, and are sure to be big sellers over Christmas. Fans who can’t wait can get a sneak preview of Gackt’s version of “Ai Senshi” on Fuji TV’s “Hey! Hey! Hey!” music show on November 12.

• Dreams Come True member Nakamura Masato (49) announced on his blog yesterday that their new album will be released a week later than planned. “And I Love You” was scheduled for an early-December release but everything was put on hold following the September 26 death of Sueda Ken, common-law husband of vocalist Yoshida Miwa (42). The new release date is December 12. The album includes the song “Moshimo Kumo Nara”, for which Sueda filmed the duo’s promo video in New York last year. DCT were scheduled to make TV appearances in support of the album, but the timing of Yoshida’s return to work is still undecided.

• Talento Shimizu Kuniaki is a father for the fourth time at the age of 57. He married his manager, Keiko (34), in January and she gave birth to a son on Sunday. Shimizu was married to talento Shimizu Kuuko from 1976 to 1982 (she died in 1991) and to a woman 14 years his junior from 1984 to 2003, with whom he had three daughters. He and Keiko plan to hold a wedding ceremony near their Lake Kawaguchi home on December 1.

• Fans of Carole King (65) had to wait 17 years to get a second chance to see her perform in Japan. She headlined the first show by “Three Great American Voices”, along with Mary J. Blige (36) and Fergie (32), at the Osaka Castle Hall last night. 8,000 fans of all ages were treated to a 3-hour show of hits old and new. The trio play the same venue tonight before heading to Saitama Super Arena on the 10th and Nippon Budokan in Tokyo on the 12-13th.