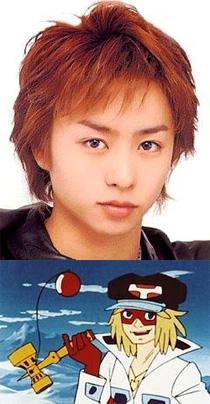 Sakurai Sho (25) of the Johnny’s Jimusho group Arashi is to star in the planned live action movie version of “Yatterman”. In his sixth starring role, the popular singer will play Takada Gan, also known as Yatterman No.1. For the role he will need to master the traditional kendama (cup and ball) toy that the character uses to fell the bad guys. Further casting, including the heroine Yatterman No.2 and villains such as Doronjo, Boyacky and Tonzler, is to be decided in December and January. The buildup to the movie’s release, scheduled for the spring of 2009, begins soon after. The popular anime, which first aired on Saturday evenings from 1977-79, is to be re-shown on NTV from January 14. Nikkatsu Corporation have chosen prolific director Miike Takashi (47) to handle the movie adaptation. His resume ranges from the gory manga adaptation “Ichi the Killer” to this year’s eclectic “Sukiyaki Western Django”.

• Singer Sawada Kenji (59) is to be prosecuted for causing a traffic accident in central Tokyo last week. Sawada was parking his car in Shibuya on Friday evening when he reversed into a passing scooter. The scooter careened off and hit a nearby parked police car. The young female rider suffered minor injuries to her leg.