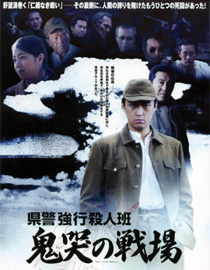 Young actor Watanabe Dai (23) seems to be making a name for himself in movies set in and around WWII. The son of Hollywood actor Watanabe Ken (48), who starred in Clint Eastwood’s gritty WWII movie “Letters From Iwo Jima,” he has his second movie leading role in “Saigo no Soukeisen”, a college baseball movie set in 1943. It tells of a final send-off game between students of Waseda and Keio Universities before they head off to war. The project, directed by Kouyama Seijirou started filming in Nagano Prefecture last month and will being distributed by the independent Cine Qua Non, the company behind recent hits “Hula Girl”, “Pacchigi!” and “Nobody Knows”. Watanabe made his acting debut in 2002 and had his first leading role just last July in Miyazaka Takeshi’s “Kikoku no Senjo” (poster above), set in postwar Hiroshima. has also appeared in the 2005 blockbuster “Otoko no Yamato”, about Japan’s most famous WWII battleship, and this summer’s “Ora wa, Kimi no Tame ni Koso Shini ni Iku”, about young kamikaze pilots and written by Tokyo governor Ishihara Shintaro.