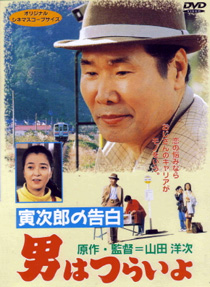 The Tora-san Museum in Tokyo dedicated to the late actor Atsumi Kiyoshi (1928-1996) celebrated its 10th anniversary Saturday. Atsumi starred as the itinerant peddler Torajiro Kuruma or “Tora-san” in the popular and long-running movie series “Otoko wa Tsurai yo” (It’s Tough Being a Man), making him one of the most recognizable faces of postwar Japan. The museum in the Shibamata, Katsushika district of Tokyo, where Tora-san had his home and to which he always returned from his travels around the country. Almost all the 48 movies in the Tora-san series were directed by Yamada Yoji (76), who is honorary head of the museum. Speaking to locals and visiting movie fans on Saturday, he said, “I always feel like making more Tora-san movies. I have maybe 10 or 20 story ideas…if only Atsumi-san were still here.” Also attending the weekend’s anniversary event was actress Baisho Chieko (66), who played Tora-san’s sister Sakura in every movie. She spoke of how difficult it had been for her to return to Shibamata for several years after her “brother” had died. But she said “It’s a nice town. You almost feel as if you might meet Tora-san or Sakura around every corner.”

• Pop trio w-inds made their third visit to Taiwan, playing for 8,000 fans at the Taipei Arena on Sunday. The group’s single “Beautiful Life” also entered the local chart at No.1, an indication of their popularity on the island. They will perform in a concert at the Great Hall of the People in Beijing on November 29, the final show in a series marking the 35th anniversary of diplomatic relations between Japan and China.

• Puffy and several other artists are in the lineup for an environmental charity concert in Tokyo early next year. Also on the bill for “Green Power Live 2008” are Ayaka, mihimaruGT, and J to S. The concert, at Zepp Tokyo on February 19, is being sponsored by the Japan Association of Music Enterprises and radio station J-Wave. Profits will go to a Tokyo citizen’s group that promotes the use of wind energy.