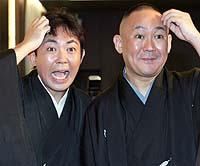 Rakugo-ka and talento Hayashiya Ippei (36) announced at a Rakugo Association press conference in Tokyo yesterday that he plans to take on his late father’s stage name. Real name Ebina Taisuke, he will become the second Hayashiya Sampei, with a series of events to mark the succession from March 21, 2009. His father, one of the leading figures in rakugo during the postwar period, passed away in 1980, leaving the Sampei name unused for almost three decades. Though normally Ippei’s elder brother would have been expected to take his father’s name, he instead succeeded as the 9th generation Hayashiya Shouzou (44) last year. That was said to have been because he has been more successful as a talento and media personality than a rakugo-ka. He was penalized earlier this year for tax evasion.

• It seems that former idol singer Akasaka Akira (34), busted for drugs at the weekend, had been having a bad year. His lawyer revealed yesterday that he and his wife of six years divorced at the end of March, with her retaining custody of their son. Akasaka has said that he first started using amphetamines in April. He is still being held at the Ohtsuka olice station. Fellow former Hikaru Genji member Sato Atsuhiro (34) apologized to his close friend via the media for not having realized the trouble he was in. He also apologized to Akasaka’s fans for the inevitable cancellation of a dinner show that had been scheduled for December.

• Japan-based singer Agnes Chan (52) performed in Beijing yesterday, her first concert since undergoing surgery for breast cancer last month. The charity concert at the Great Hall of the People marked the 35th anniversary of the normalization of ties between China and Japan. In the audience was her 81-year-old mother, who had flown in from Hong Kong. Chan sang 17 songs in English, Japanese, Cantonese and Mandarin. The concert had originally been planned for September 25, but was postponed due to a metformin with the Communist Party Congress. Chan was found to have breast cancer in mid-September and underwent surgery in early October.