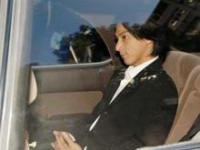 The trial of former teen idol singer Akasaka Akira (34) began and ended yesterday at the Tokyo District Court. The former member of popular 1980s Johnny’s Jimusho group Hikaru Genji was given the 18-month prison sentence sought by prosecutors, though as is usual in such cases it was suspended for three years. A tearful Akasaka, dressed in a black suit, said he would not return to show business and would work part-time jobs to pay child support to his ex-wife. The couple divorced in March and she has custody of their 5-year-old son. Akasaka spoke of his loneliness at not being able to see his son and how he had turned to sleeping pills and then amphetamines to “ease his pain”. he was arrested in Tokyo on October 28 when police found 0.6g of the drug in his possession.

• Young actress Hoshino Natsuko (20) has been suspended from working for one year following a recent entry on her blog. Her management agency removed the entry and had her write an apology for what they described as an “inappropriate” comment about the case of a Kagawa Prefecture woman and her two young granddaughters who have been missing since last Thursday. Hoshino recently appeared in the hit movie “1 Litteru no Namida” (1 Litre of Tears).

• Actress Yada Akiko (28) gave birth to her first child on Monday, it was revealed yesterday. She and actor-turned-singer Oshio Manabu (29) married in November of last year. Yada has decided to be a full-time mother to her new son but plans to return to her acting career at some point.