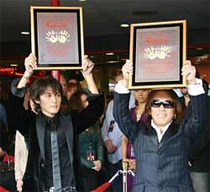 Rock giants B’z yesterday became the first Asian artists to be inducted into the Hollywood Rock Walk. Inaba Koshi (43) and Matsumoto Takahiro (46) were at the Guitar Center in Los Angeles for the induction ceremony, though the event drew only about 100 fans. Speaking in English, Matsumoto said how when they started out they had never dreamed of ending up in such a place, and the pair thanked their fans for their success. Inaugurated in 1985, the Rock Walk includes all the major names of U.S. rock history. B’z earned their place with combined sales of well over 70 million albums and singles.

• Rock impersonator Yazawa Eisaku (46) has been arrested on assault charges again. Real name Mita Masami, he performs on stage and on variety shows as rock legend Yazawa Eikichi. He was arrested late last night for assaulting the manager of the restaurant he runs in Utsunomiya, Tochigi Prefecture. Seemingly he returned drunk from a show in Gifu Prefecture and was unhappy about the restaurant’s poor sales. He threw over a table before the physical assault, though according to reports all he actually did was grab the man by his jacket lapels and threaten him. The manager had only recently left hospital following a traffic accident in August. Mita was arrested in July when he got into a drunken argument with fellow impersonators at an apartment in Utsunomiya. He chewed up the earlobe of Tsuntsuku (Tanaka Kenji, 43), a lookalike of Morning Musume guru Tsunku, leaving a wound that took several weeks to heal.

• Reggae singer Minmi (32) became a mother for the first time yesterday. She updated her blog last night that she and Wakadanna (31), a member or reggae unit Shonan no Kaze, were proud parents of a bouncing baby boy. The couple are not married.

• Yamashita Tatsuro’s 1983 hit “Christmas Eve” is a staple on the airwaves at this time of year, and has been used for years by JR Tokai in their winter ad campaigns. This winter the English version of the song, first released on Yamashita’s 1993 album “Season’s Greetings,” is to be used in a TV commercial for the first time. Car maker Suzuki will feature the song and model Mori Izumi (25) in a romantic short story format in ads for the Chevrolet MW.

• Young Johnny’s Jimusho idol group Hey! Say! Jump have seen their debut single, “Ultra Music Power,” enter the Oricon chart at No.1. It’s the 13th time the feat has been achieved and the first since KAT-TUN did it last year with “Real Face”. Naturally enough, they are also a Johnny’s unit. On top of the latest Oricon album chart is…you guessed it, another Johnny’s duo: Kinki Kids have their 12th chart-topping album with “U”. All of this sales success has to be tempered by the commonly held belief that the country’s leading boy band agency is “in bed” with the country’s main sales chart company.

• Comedian Yamazaki Housei (39) has been in hospital since last week with pneumonia, according to his Yoshimoto Kogyo agency. He was found to be in danger of developing peritonitis and was hospitalized last Tuesday.