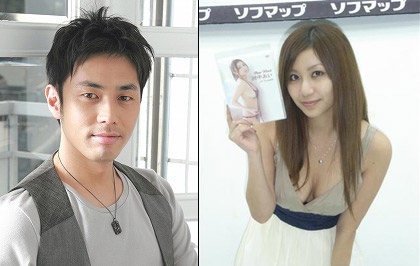 Hakamada Yoshihiko (37) is having a good year. The popular actor was recently announced to the cast of next year’s NHK taiga drama, and yesterday it was revealed that he is engaged to young “guravia aidoru” (pin-up model) Kawanaka Ai (25). According to a source close to the couple, they met through mutual friends about two years ago but only started dating this spring. Hakamada is said to have proposed about a month ago.

The couple plan to get married on August 8. But with Hakamada now in preparation for his key role as Toyotomi Hidenaga (1540 – 1591) in “Gou – Himetachi no Sengoku,” which starts filming in September, it’s likely that they won’t have a wedding ceremony or reception until next year.