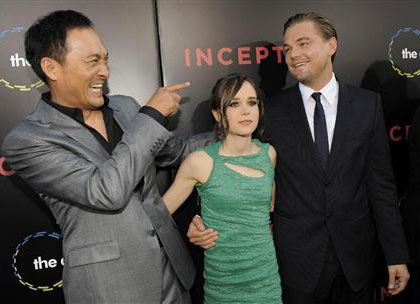 Leonardo Dicaprio reckons that his “Inception” co-star Watanabe Ken should be made a national treasure in his homeland. The words of praise were among many thrown around as the latest Christopher Nolan-directed blockbuster premiered yesterday in Los Angeles. Dicaprio (35, photo right) and Watanabe (50, photo center) do not play friends in the dreams-meet-reality world of the science fiction movie, but off-screen the camaraderie between them, Nolan and the other cast members was clear to see. Leo said of his Japanese co-star, “He’s an unbelievably talented actor. He should be a national treasure in Japan.” Also at the Grauman’s Chinese Theater in Hollywood was Watanabe’s wife, actress Minami Kaho (46), and international cast members including Canadian actress Ellen Page (photo center), French actress Marion Cotillard, and Irishman Cillian Murphy. The movie’s soundtrack was written by Hans Zimmer, who gave a dramatic 25-minute performance of music from the film with musicians including guitarist Johnny Marr. The movie is scheduled to open in Japanese theaters on July 23, though Watanabe will be back home to greet audiences at previews this weekend.
Related stories:
Inception Hijacks Japan (Jul. 8, 2010)
New Poster Featuring Leo, Ken (Jun. 21, 2010)

Apologies for a Public Kiss
Actress Kitano Kii (19) has apologized on her blog for the recently published magazine story about her hotel stay with actor Sano Kazuma (21). She wrote, “I apologize sincerely for doing such a frivolous thing.” She added that she was sorry for “surprising and hurting” her fans and that she would focus seriously on her work from now on. The two were photographed kissing on the street and going to a hotel in Tokyo.
Related stories:
Romance for Kitano Kii, Sano Kazuma (Jul. 9, 2010)