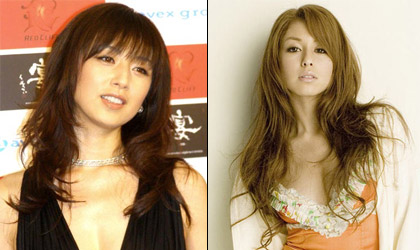 Actress Takaoka Saki (37, photo left) is expecting a baby in the autumn, according to the Sankei Sports newspaper. Sources say she has been dating a 43-year-old Nagoya property company owner since the end of last year. The couple are said to be already living together but plan to wait until after the baby is born to officially tie the knot. Takaoka was previously married to actor Hosaka Naoki (42), with whom she had two children before they divorced in 2004. She has since been romantically linked to several other actors.

Takaoka changed her management to the major Avex label at the beginning of 2008. She appeared in a Ninogawa Yukio-directed stage production at the end of that year, and last year put her English language skills to good use in the U.S.-Japanese movie “The Hariyama Bridge.”

A Homecoming for Beni
J-pop singer Beni (24, photo right) made her U.S. debut yesterday as she performed at the Anime Expo in Los Angeles. She was invited as an official guest of honor to the convention, held from July 1-4. On Saturday afternoon she performed for about 3,500 fans at the Nokia Theater and was the opening act for J-rock band, Sophia. Beni sang six songs, including her new single “Yurayura.” It was a homecoming of sorts for the singer, whose father is Japanese-American and who spent several years of her youth in southern California.