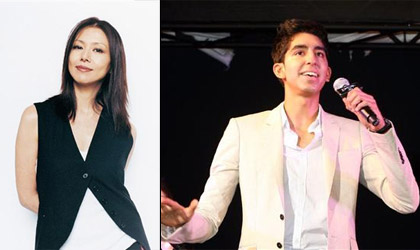 Saibara Rieko’s popular manga strip “Mainichi Kaasan” is to be adapted for the big screen, it was announced yesterday. Whoever did the casting pulled off a PR coup because the leading roles of a married couple will be played by actress Koizumi Kyoko (44, photo left) and actor Nagase Masatoshi (43), who divorced in 2004. The manga, which has run in the Mainichi Shimbun newspaper every Sunday since October 2002, is about the daily life of the Kamohara family, based on Saibara’s own family. She married journalist and photographer Kamoshida Yutaka in 1996, with whom she had two children before the marriage ended in divorce in 2003. They got back together in 2006, but Kamoshida died of cancer in 2007.

Saibara (45) said of Koizumi, popularly known by her nickname KyonKyon, “We are women of the same generation who have been through a lot. I think she’ll play me very well.” The manga has been published in book form as five volumes, which have sold over 1.5 million copies. It has been running as an anime on TV Tokyo since April 2009.

Airbender Premieres in Tokyo
The 3D Hollywood flick “The Last Airbender” had its Japan premiere in Tokyo yesterday. Director M. Night Shyamalan, British star Dev Patel (20) and other cast members were at the Urban Dock LaLaport Toyosu venue. They were joined for the event by local talento Yamamoto Mona (34) and soccer star Nagatomo Yuto (23), recently returned from the World Cup in South Africa. Patel was clearly excited to be on his first visit to Japan, shouting out to fans, “Tokyo! Saiko!” The movie, critically slammed but a hit at the U.S. box office, opens here on June 17.