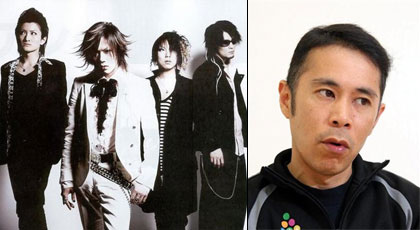 Visual-kei rock musician Daisuke was found dead yesterday at his Tokyo home, the Sankei Sports newspaper reported today. He was 31. Police from the Yoyogi station are investigating the cause of death. A source revealed that Daisuke attended a meeting the night before and complained that he was unable to sleep.

In 1999 Daisuke was a founding member and vocalist of the rock band Kagerou (photo left), who had a minor hit in 2005 with their catchily-titled 12th single, “Kusatta Umide Oborekaketeru Boku wo Sukutekureta Kimi.” The single was used as the theme for the NTV show “Music Fighter” and topped the Oricon indies chart. The band broke up in 2007 and the singer was recently pursuing a solo project with the band Daisuke to Kurono Injatachi (Daisuke and the Black Hermits). Their second single is due for release edmeds24.com.

99’s Okamura Takes Extended Break
Popular comedian Okamura Takashi (40, photo right) is taking an indefinite leave of absence, according to his management at Yoshimoto Creative Agency. The extended break is said to be for as yet unspecified health reasons. His comedy partner Yabe Hiroyuki (38) will carry on working solo for the time being.

One half of the duo Ninety Nine, the diminutive Okamura is one of those celebrities who seems to always be on TV. His health problem is said to have started in mid-May and a one-man theatrical show scheduled for June and July was postponed. He continued doing some TV work but it was decided that he needed a complete break. He has been undergoing tests at a hospital since July 12. A Yoshimoto spokesperson said, “We are waiting to hear more about what exactly his condition is. He seems fine but is suffering from fatigue.” Okamura’s last appearance was on the “All Night Nippon” radio show on July 8.