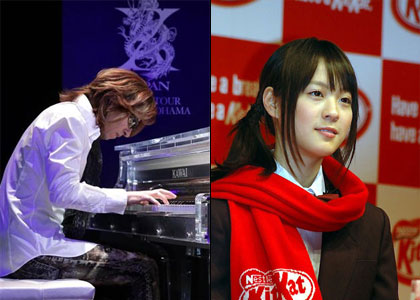 X Japan leader Yoshiki (photo left) and vocalist Toshi held a press conference and mini concert in Tokyo yesterday. The occasion was the announcement of the band’s first ever concert tour of North America, which will follow the previously announced appearance at the Lollapalooza Festival (August 8) in Chicago and two shows at Yokohama Stadium (August 14-15). Yoshiki will no doubt be hoping that it’ll be third time lucky. The band held a press conference in New York in 1992 to announce plans for their U.S. debut, but those plans fell through and the band split in 1997. After their reunion two years ago, they announced shows at Madison Square Garden, but again those plans were shelved when Yoshiki suffered from a herniated disc.

The Yokohama shows will be the first outdoor solo concerts by the band and they will play to 150,000 fans over the two days. The show will then head across the Pacific for a tour that will take in ten cities, including Los Angeles, San Francisco, Seattle, Vancouver, New York and Boston. The shows will be held at 2,000-6,000-seat venues. “It’s going to be an intense show!” said Yoshiki. Toshi added, “It’s a new start for us in many ways. We’re going to give it everything and leave no regrets.”

And fans have something perhaps even bigger to look forward to – the first original X Japan album in 14 years. Yoshiki said, “It’s more than 90% complete. We expect to deliver the goods next week.” The album includes the new song “Jade,” which will be the first single for U.S. release, and English versions of “tears,” “Rusty Nail” and “Kurenai.”

Romance for Kitano Kii, Sano Kazuma
Actress and singer Kitano Kii (19, photo right) has a new love in her life, according to today’s issue of weekly magazine “Friday.” She was photographed smooching with ikemen (handsome) actor Sano Kazuma (21) earler this month, and they spent the night together at a Tokyo hotel. Management for Kitano said only that the two are “good friends.”

Kitano was previously linked with actor Hayashi Kento (19), with whom she appeared in the movie “Love Fight” earlier this year. She made her breakthrough in 2007 with starring roles in the movie “Kofukuna Shokutaku” and the Fuji TV drama series “Life.” She is also known as the commercial face of KitKat. Sano made a name for himself in last year’s Fuji drama series “Otomen” and has a regular role in the upcoming series “Hammer Session” on TBS.