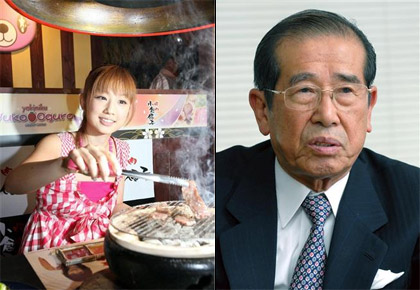 Talento Ogura Yuko (26, photo left) has been sued for breach of contract, according to today’s issue of weekly magazine “Shuukan Shincho.” The court case was initiated by the owner of a yakiniku (Korean barbecue) company with whom Ogura was contracted to lend her name and image to a restaurant in the Kabukicho entertainment district of Tokyo. When the premises were vacated, it was understood that they would be completely renovated before reopening for business. But the restaurant opened without any renovation work being carried out. The company owner and the building landlord have sought ¥25 million in damages from Ogura. Reporting on the case, the Sankei Sports newspaper said they got no response from Ogura’s management agency.

NHK Unsure About Sumo Broadcast
Amid the ongoing scandal that has rocked the sumo world, NHK is still on the fence about whether they will broadcast the upcoming tournament live from Nagoya. The two-week event, one of six held annually, starts on June 11. NHK chairman Fukuchi Shigeo (76, photo right) said at his regular press conference yesterday that the network will make a decision after the Japan Sumo Association reports on its emergency board meeting on June 5. NHK has aired live coverage of every tournament since it began, with the only exception being in the case of natural disaster. The latest scandal to hit Japan’s national sport involves illegal gambling on baseball and association with yakuza underworld figures.