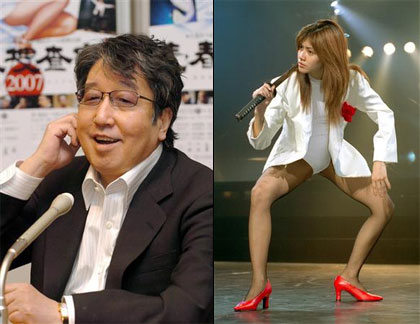 Tsuka Kohei, one of Japan’s most important modern playwrights, died on Saturday of lung cancer at a Chiba Prefecture hospital. He was 62. As reported on Japan Zone, Tsuka entered hospital to undergo treatment in January. But from his hospital bed he used videotapes and the telephone to direct a production of one of his most famous plays, “Hiryuden 2010 – Last Princess,” with up-and-coming actress Kuroki Meisa in the lead role. Tsuka had a reputation for turning popular female aidoru stars, such as Uchida Yuki (34, photo right, in a scene from Shin-Hiryuden in 2001), Ishihara Satomi (23) and Hirosue Ryoko (29), into real actresses.

Among Tsuka’s other well-known works are “Atami Satsujin Jiken,” which won top award in 1973, and “Kamata Koshinkyoku” in 1980. Tsuka became a household name when a Fukasaku Kinji-directed movie adaptation of “Kamata…” was a massive hit in 1982. A new stage version is currently scheduled to open on August 12.

An ethnic Korean whose given name was Kim Bon Un, Tsuka was born in Fukuoka Prefecture. He became involved in the theater while a student at Keio University. In 1980 he married actress Kumagai Mami (50) after she had appeared in his production, “Salome,” but the marriage ended in 1982. The following year he married Ikoma Naoko (48), a former member of his theatrical troupe. Tsuka used all kana characters for his pen-name, an idea he said was inspired by manga-ka Chiba Tetsuya. A famously heavy smoker, his medical condition forced him to quit the habit.
Related story:
Tsuka Kohei Battles Cancer (Jan. 26, 2010)