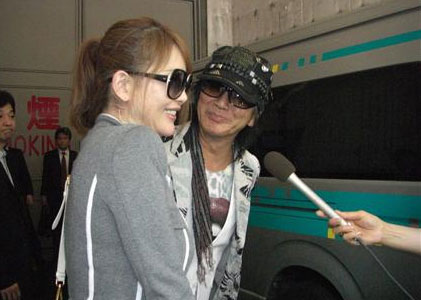 Rock singer Tamaki Koji (51) and talento Aota Noriko (42) got married last Friday. The couple registered their marriage on Friday in Tamaki’s hometown of Asahikawa in Hokkaido. The following day they flew back to Tokyo, where they are living in a plush high-rise apartment building in the Nishi-Shinjuku district.

It’s just two months since their relationship first grabbed the headlines, though it was later revealed that they had dated as long ago as 1989. They broke up shortly before Aota had her showbiz breakthrough as a member of the pin-up group C.C. Girls. The marriage is Aota’s second, while it’s the fifth time around for Tamaki if you include his bizarre relationship and brief marriage with actress Ishihara Mari (46).

Tamaki is currently on tour of Japan and Asia with his band Anzen Chitai. Though Aota’s management has been against the relationship, and especially Tamaki’s frank talk to the media about their sex life, she has put her own career on hold and has been traveling with him on tour. They arrived here in Nagoya yesterday for two shows, and when asked about their plans for children (he has none), Tamaki said, “During the tour, we’ll get right to it!” The tour ends at the Nippon Budokan in Tokyo on October 6.
Related stories:
Tamaki Koji, Ishihara Mariko Together At Last (Feb. 26, 2009) 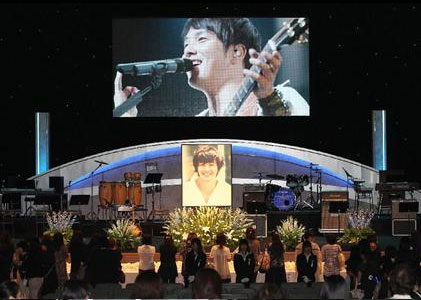 Japan Fans Say Sayonara to Korean Star
In a rare case for an overseas celebrity, over 14,000 fans of the late South Korean star Park Yong Ha turned out for a memorial service in Tokyo yesterday. The actor and singer committed suicide at his Seoul home at the end of June. The event was held at the Tokyo International Forum in the center of the capital, the same day and venue where Park had been scheduled to perform in concert. Park’s mother, sister and brother-in-law were in attendance as fans, many of them in tears, brought bouquets of flowers.
Related stories:
Korean Star Park in Apparent Suicide (Jun. 30, 2010)