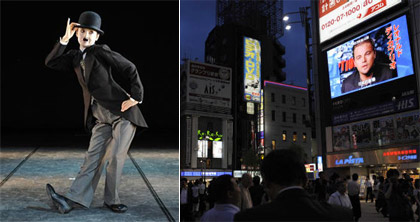 Movie director Suo Masayuki (53) has teamed up with his wife, actress and former top ballerina Kusakari Tamiyo (45, photo left), to make a dance film about Charlie Chaplin. It will be the first big screen collaboration between the two since “Shall We Dance?” the hit 1995 film that first brought them together. Adapted from a ballet created by French choreographer Roland Petit (86), “Dancing Chaplin” is expected to have a spring 2011 theatrical release. The film will be in two parts, one dealing with the production process, the other focusing on the ballet itself.

Kusakari, formally retired from ballet in April 2009 and her last public performance included an excerpt from the Chaplin ballet. She performed with Italian ballet dancer Luigi Bonino (60), who co-stars in the movie version. The dance sequences were filmed at a Tokyo studio in July of last year. Suo says that his wife’s experience and advice was invaluable to him in understanding the physical limits of dancers and how best to film them.

Inception Hijacks Japan
The team behind Hollywood movie “Inception” pulled off a very clever PR stunt across Japan yesterday. On Jul 7, at 7:07pm, a promo video was played on 136 big screens on street corners across the country and about 20,000 monitors in trains on major commuter routes. The streets of Tokyo alone saw the video played in 48 different locations. It also played on about 2,000 TV screens on display in Yamada Denki electrical stores across the country.

The movie is directed by Christopher Nolan (39) and stars Leonardo Dicaprio (35) and Watanabe Ken (50). Following an announcement of a “special message from Hollywood” the three appeared on screen and addressed the Japanese public. The 75-second video brought commuter crowds to a standstill, such as about 2,000 office workers in the SL Square in front of Shimbashi station in central Tokyo (photo right). Inception is scheduled for release here on July 23.