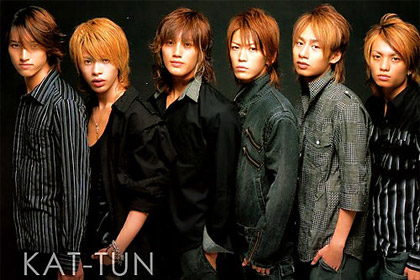 Johnny’s Jimusho (profile) aidoru group KAT-TUN were minus one member as they kicked off their Asia concert tour (boldly titled “World Tour 2010”) last weekend. Kamenashi Kazuya (24, photo 3rd from right) apologized to fans before the show at Tokyo Dome for the absence of Akanishi Jin (26, photo 3rd from left), who has decided to leave the group and focus on his solo career in the U.S. He said he hadn’t heard anything from his band mate and didn’t even know if he was currently in Japan. The five remaining members performed 34 songs, including their new release, “Going.” The group will perform their first ever overseas concerts in Seoul, South Korea and Taipei, Taiwan, next month.

Akanishi later posted a message on the Johnny’s members website, saying that the main reason he left the group was a “strong difference in musical direction,” rather than any personal problems with the other members.

Director Edagawa Dies at 93
Movie director Edagawa Hiromu died last week at a Tokyo hospital, it was announced on Tuesday. He was 93. He was best known for his comedy movies of the 1950s and 60s, such as “Koi to Kane” and “Salaryman Dontobushi.”