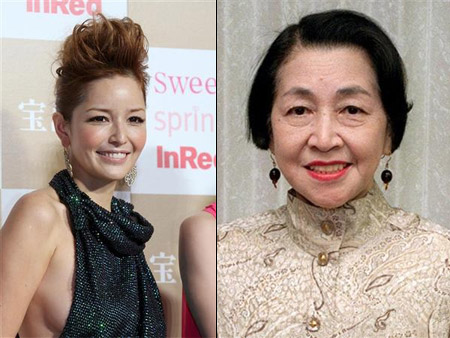 Model-talento Rinka got married at the weekend. In her usual offbeat style she announced the news on her blog yesterday, posting a photo of herself with the marriage registration form and even a dialog between herself and the “old guy at the information desk.” Rinka and her new hubby, described as a construction company employee in his early 30s, will hold a small reception at their Tokyo home this evening. The pair tied the knot after a relationship of eight years, though they split up once in 2007. When Rinka announced her engagement last October, it took many by surprise as she had long touted her image as one of the “make-inu” types, eligible female celebrities destined to remain forever single.

• Veteran actress Azuma Mieko died of heart failure at her Tokyo home on Friday night, it was revealed this morning. She was 85. She was one of the founders of the Gekidan Seinenza theater group in 1954 and remained one of its leading actresses for many years. She appeared in more than 90 movies, dozens of TV dramas, and was recognized with an award from the Ministry of Culture in 1997. She was also famous for her “free” marriage to the influential social psychologist Minami Hiroshi (1914-2001).

Tamura Acknowledges Romance With Amuro
Oguri, Yamada – Who are They Fooling?