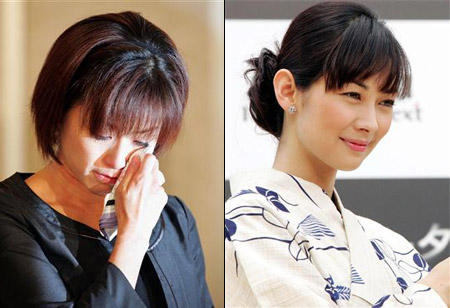 As someone who was molded into a starlet from her mid-teens and has lived her life in the media spotlight, Sakai Noriko (38, photo left) will always have to contend with preconceptions. Once considered one of the “purer” idols, the arrest of both her and her husband on drug charges has come as a major shock. The authorities no doubt see it both as a blow to their anti-drugs efforts and also as a chance to send a strong message.

So, Sakai is saying and doing the right things, unlike the evasion and mixed stories that followed the initial arrest of her husband, Takaso Yuichi, in early August. At his trial last week, Takaso said he hoped he can once again live with his wife and their son, just as a good family man should. But the media not to subtly portrayed him in a bad light, as he if is the only real villain in the case. Yesterday Sakai said that divorce might be best, showing that she’s prepared to sacrifice her marriage if it helps keep her and her husband off the drugs. The orchestrated questions from prosecutors and Sakai’s autocue answers about the dangers and addictiveness of drugs made yesterday seem less like a trial than an anti-drug campaign message.

Aizawa Masahisa (60), the man who has been like a father to Sakai during her entire career, stepped down as president of Sun Music in September to take his share of responsibility for the case. The company terminated Sakai’s contract and Aizawa said that that he had agreed to be a character witness at the trial only because Sakai’s step mother was unable to do so. She is currently in rehabilitation following cancer surgery, which ties in with Sakai’s claim that she wants to study nursing.

And media comments about Sakai’s court appearance yesterday have been predictably harsh. Producer Terry Ito (59) said about her testimony, “She gets full marks for delivering her speech like the actress she is. It was clear that she had rehearsed it well.” He added, “This case will be remembered for years, and it will be really tough for her to bounce back from it. It’s going to be hell for her.” Manga-ka Yaku Mitsuru (50) said, “If she gets saddled with the financial costs of what she’s done, she’ll be deeply in debt. She can no longer afford to be choosy, and should be ready to pose nude if need be.”

• Despite denials by her management, popular actress Ito Misaki is expected to announce soon that she’s getting married next month. A story appeared in today’s issue of women’s weekly magazine “Josei Jishin” saying that Misaki (32, photo right) and pachinko company president Enomoto Yoshinori (40) were to tie the knot in Hawaii on November 24. The story said that Misaki planned to wear a dress designed by her friend, model turned fashion designer Kanda Uno (34). The two started dating after they met a year ago at the Hawaiian wedding of talento Uematsu Mami. Misaki’s Ken-on management agency say that the two are just friends and that they have received no notification from Misaki of any wedding plans. But the couple have been spotted together several times over the last year, including on a trip to the Yufuin onsen resort in March.