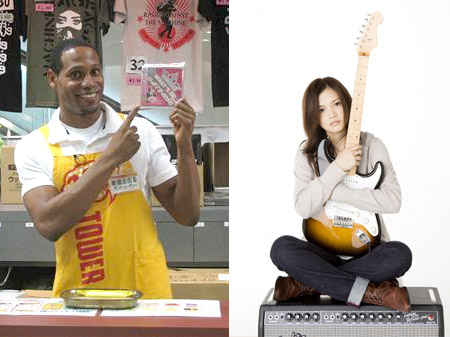 Actor Dante Carver (32, photo left) was made “manager for a day” at Tower Records in Shinjuku yesterday. Carver is best known for his role as the “Nii-chan” (elder brother) of the Softbank family in TV commercials alongside actress Ueto Aya. But yesterday’s PR stunt was part of the promotion for the “What’s Up x The Finest – The Greatest Hits” album. Carver has been appearing in TV commercials for the album of recent urban music hits, dressing up as Black Eyed Peas front man will.i.am, Flo Rider and even Lady Gaga.

• Singer Yui (22, photo right) is back on top of the singles chart. “It’s All Too Much/Never Say Die” has sold more than 75,000 copies in its first week of release to reach No.1 on the latest Oricon chart. Following the July 2008 chart topper “Summer Song” she took the best part of a year off, canceling a scheduled tour and fan club events. She bounced back in June and topped the singles chart with “Again.” She now has three No.1’s in a row, making her just the third female singer-songwriter to achieve the feat, after Matsutoya Yumi (55) and Utada Hikaru (26).