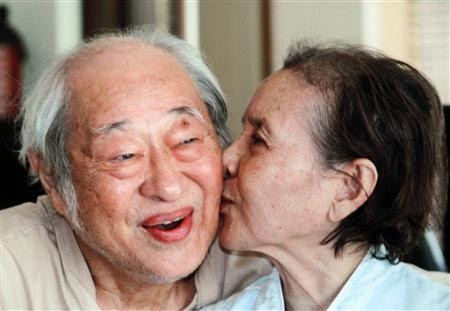 Actress Minamida Yoko underwent emergency surgery at the weekend following a brain hemorrhage, it was reported yesterday. On Saturday night she was rushed to hospital, where she is in the intensive care unit and has yet to recover consciousness. Minamida (76) has been suffering from dementia since 2005 and quit showbiz in 2006. She has been cared for at home by her husband, actor Nagato Hiroyuki (75), but was hospitalized twice earlier this year. She had recovered sufficiently that the couple were featured on an episode of the variety show “Nakai Masahiro no Kinsma!” earlier this month. Nagato is currently appearing in a theatrical production at the Meijiza in Tokyo. He was off the day of his wife’s latest collapse but returned to work the following day. He is scheduled to speak to reporters today about his wife’s condition.

• The NTV drama series “Aishiteru – Kaiyou” has won the Grand Prix at the 2009 Tokyo Drama Awards. A manga adaptation, the drama starred Inamori Izumi as the mother of a 10-year-old only son who murders a 7-year-old boy and Itaya Yuka as the victim’s mother. The two top individual awards went to the stars of Fuji TV shows. Nakai Kiichi was awarded the best actor prize for “Kaze no Garden.” The series was the swansong of actor Ogata Ken, who won a posthumous special award. And the best actress award went to Amami Yuki for “Boss.” The awards event was started last year to help promote Japanese-made TV dramas to the overseas market, and is timed to coincide with the Tokyo International Film Festival.

• Movie producer Sasaki Yoshino died at a Tokyo hospital on September 24 of ovarian cancer, it was revealed yesterday. She was 51. Among her recent projects were Isomura Itsumichi’s “Gege” (2004), about a man slowly going blind, and Suo Masayuki’s 2006 expose of the Japanese legal system, “Soredemo Boku wa Yatenai.”