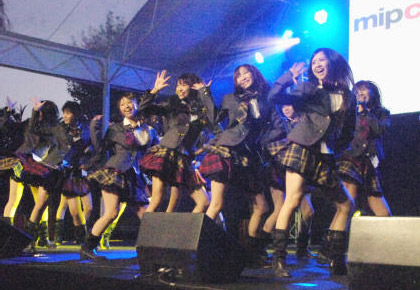 Members of the all-girl pop idol group AKB48 performed yesterday at the opening party of the International Film and Programme Market for Television, Video, Cable and Satellite (MIPCOM) in Cannes, France. It was the third overseas performance by the group, following shows in Paris in August and New York last month. Wearing costumes in the style of Japanese high school girl uniforms, the 12 members sang in English. Doing their bit to promote Japanese tourism, they encouraged fans of pop culture to visit Tokyo and their “home base” in the capital’s Akihabara district. MIPCOM is held in Cannes every autumn and is an event for co-producing, buying, selling, financing and distributing entertainment content. It provides a networking forum to discover future global trends and in the area of pop culture, there is always a keen interest in what’s coming out of Japan. AKB48, the brainchild of producer Akimoto, was formed in 2005 and has dozens of members divided into three teams and a group of trainees. They perform daily – twice a day on weekends – at their own theater in Akihabara, the mecca of otaku culture. Every single they release is tied into a TV commercial, anime or drama series.

• Singer Kato Miliya (21) is to provide a song for a Hollywood movie for the first time. She wrote “Destiny” as the image song for “New Moon,” the second movie in the hugely successful teen vampire “Twilight” series. Directed by Chris Weitz, the movie is scheduled to open here on November 28. Heart throb star Robert Pattinson is due to visit Japan next month to promote the movie. Kato previously provided the theme song for the 2007 domestic movie “Bubble e Go! Time Machine wa Drum-shiki.”