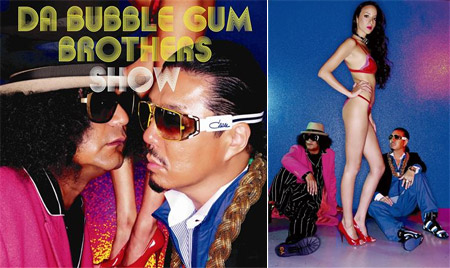 Pop-soul duo the Bubble Gum Brothers are to release their first new album in 16 years. Best known for hits like “Won’t Be Long” that helped define the so-called “bubble” years in 1980s Japan, Brother Tom and Brother Korn made their comeback at the end of last year. To add a little spice to the release of “Da Bubble Gum Brothers Show” the album cover features a pair of shapely female legs. It turns out they belong to Michibata Angelica, the youngest of three half-Argentinian, half-Japanese model sisters. Her sister Jessica (25) is the girlfriend of newly crowned Formula 1 Racing champion Jenson Button (29). Due for release on November 25, the new album features collaborations with the likes of Suzuki Masayuki (53), Kubota Toshinobu (47) and Aoyama Thelma (21). 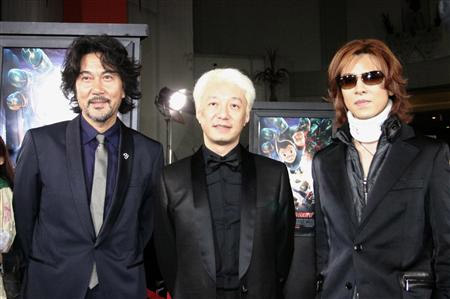 Actor Yakusho Koji and musician Yoshiki were among the attendees at Monday’s U.S. premiere of “Astro Boy” (Released as “Atomu” in Japan). The computer-animated 3-D film adaptation of Tezuka Osamu’s most famous work had its first showing outside Japan at Grauman’s Chinese Theater in Hollywood. Tezuka’s son Makoto (48, photo center) said, “It’s miraculous that Atomu is being screened at this theater, which my father loved. He must be very happy.” Yakusho (53, profile, photo left), who voiced the role of Atomu’s creator Dr. Tenma, commented, “I look forward to seeing Japan’s Atomu spread out from America across the world. X Japan drummer and leader Yoshiki (photo right) is based in Los Angeles and was set to supervise the music for the movie until neck surgery sidelined him for several months. He is still wearing a neck brace. “Tetsuwan Atomu” was the manga, first published in 1952, that made Tezuka (1928-89, profile) a household name. And in 1963 his adaptation for TV made it the pioneer of Japanese anime. “Atomu” opened in Japan on October 10, while “Astro Boy” will be in U.S. theaters from the 23rd.

• UPDATE: Actress Tokiwa Takako (37) and actor-producer Nagatsuka Keishi (34) announced on their respective blogs last night that they had just got married. A representative for the couple registered their marriage at a municipal office in Tokyo yesterday morning.

Actress Tokiwa Takako and actor-producer Nagatsuka Keishi are close to announcing their engagement, according to Sports Hochi. The newspaper based the story on reports from a friend of the couple. Tokiwa is one of the busiest actresses in Japan, whose resume includes the lead role in this year’s NHK taiga drama “Tenchijin,” dozens of TV drama roles, and the recent “20th Century Boys” movies. Nagatsuka, the son of popular actor Nagatsuka Kyozo, formed the Asagaya Spiders theatrical group in 1996 and has won several major awards over the last decade. He and Tokiwa appeared together in the 2003 movie “Geroppa!”