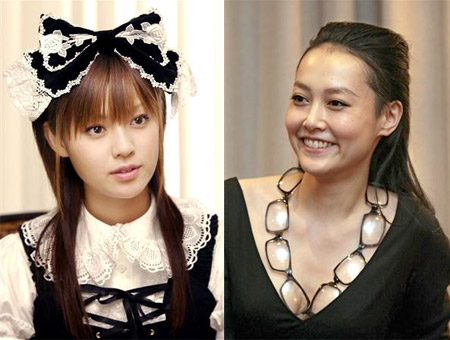 Popular actress Fukada Kyoko (26, photo left) is getting serious with actor Shimizu Ryotaro (21), according to today’s issue of women’s weekly magazine “Josei Seven.” The third son of talento Shimizu Akira (55), Ryotaro has been seen frequently at Fukada’s Tokyo apartment. In a statement, her management agency said only that Shimizu is “a close friend.”

Meanwhile the same magazine reports that romance seems to be over between SMAP’s Nakai Masahiro (37) and J-pop diva Koda Kumi (26). A friend of Koda’s told the magazine that she had felt the relationship was over at the beginning of the summer. Koda said she hardly ever heard from Nakai and decided to change her mobile phone. The pair’s relationship, though never officially acknowledged, was first reported back in August 2007. The couple were spotted together at Nakai’s apartment the following December, and were seen vacationing overseas together in May of last year.

• Actress Kikuchi Rinko (28, photo right) is to make her first TV drama appearance in eight years. The 2007 Oscar nominee will appear in the second season of Fuji TV’s “Liar Game,” which airs on Tuesday nights from November 10. Her last regular TV role was in the NHK morning drama “Churasan” in 2001. Kikuchi made her acting debut in Shindo Kaento’s “Ikitai” in 1999 and has worked mainly in movies ever since. She recently worked on the eagerly awaited Murakami Haruki adaptation “Noruwei no Mori” (Norwegian Wood), which will be in theaters next year. “Liar Game” is adapted from a manga that appeared in the “Shuukan Young Jump” magazine. It was adapted for TV – with Toda Erika (21) and Matsuda Shota (24) in the lead roles – in April 2007 and gained a big audience despite its 11pm time slot. A movie version is slated for release in February 2010.