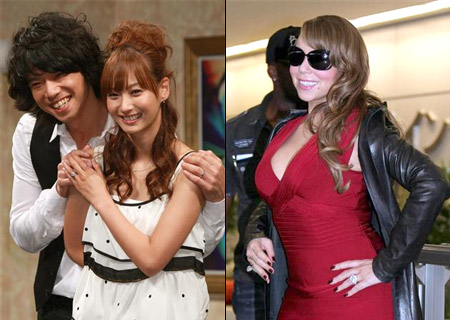 Comedian Shoji Tomoharu (33) and singer Fujimoto Miki (24) are to hold a lavish wedding reception next month, it was revealed yesterday. The event will be held in the Crystal Palace hall at the Grand Prince Hotel in Akasaka, Tokyo on November 27. The couple held a small garden wedding ceremony at the Hawaiian resort of Hokulia on July 3 and registered their marriage in Tokyo a week later. They are said to have invited over 400 fellow celebrities, friends and family to the reception. With “Miki-T” a former member of J-pop powerhouse Morning Musume, and Shoji one half of the popular Yoshimoto comedy duo Shinagawa Shoji, the reception will no doubt become a major entertainment event and will be attended by some of the biggest names in showbiz. It remains to be seen who will be chosen to emcee the event.

• Meanwhile, Yoshimoto (profile) has sued the publisher Shinchosha over an article that appeared in the “Shuukan Shincho” magazine in July. The article raised suspicions regarding financial dealings between Yoshimoto CEO Osaki Hiroshi (56) and a subsidiary of the the major comedy talent agency. The company and Osaki have sought ¥22 million in libel damages, while at the Tokyo District Court on Wednesday the publisher sought to have the case dismissed.

• A chirpy Mariah Carey (39) arrived at Tokyo’s Narita Airport yesterday. The singer is in Japan for three days to promote her latest album, “Memoirs of an Imperfect Angel.” Dressed in a revealing red mini one-piece she posed for photographs but didn’t sign any autographs. She greeted the 300 or so fans who were at Arrivals to see her with “Aishitemasu (I love you), Tokyo, Japan!” When she was last in Japan, in May of last year, she brought new husband Nick Cannon (29) but this time she arrived alone. She is scheduled to appear on the live TV Asahi show “Music Station” tonight and will fly back to the U.S. tomorrow.