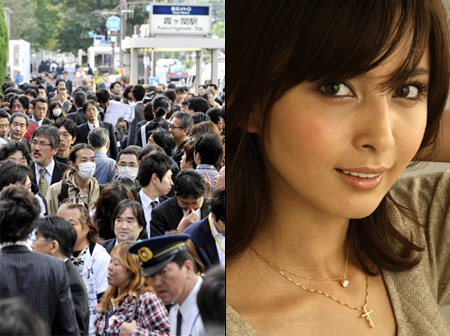 Yesterday saw the trial of Takaso Yuichi (41), husband of former top idol Sakai Noriko, at the Tokyo District Court. More than 1,500 people lined up in the morning (photo left) hoping for a chance to get one of the 20 seats in the public gallery, though even more are expected to turn out next Monday for Sakai’s trial. Both are charged with possession and use of amphetamines. Takaso arrived in court looking a lot smarter – in a gray suit and with his hair no longer dyed brown – than when he was released on bail on September 16. But the media pointed out several things that indicated his attitude wasn’t repentant enough. Though food and drink are prohibited in the courtroom, he walked in with a bottle of barley tea in his hand. He was described as alternatively dozing off and crying during his father’s testimony. When questioned, he said that the inconsistencies and lies in his early questioning by police had been to cover for his wife, who was on the run at the time but not yet the subject of an arrest warrant. He also said his lawyer had told him to say that he used the drugs in a public toilet rather than at his Tokyo apartment. The trial was wrapped up yesterday, with prosecutors seeking a 2-year prison sentence for Takaso, and the verdict is due to be handed down on November 22.

• Talento Kato Natsuki (24, photo right) is suing her management agency and former boyfriend for ¥30 million she says was stolen from her. Between May 2006 and February of this year, she was dating her manager who she says claimed he was putting the money into a savings account for her. Kato took the matter to the Tokyo District Court in August, where both the man and the agency have denied the charges. 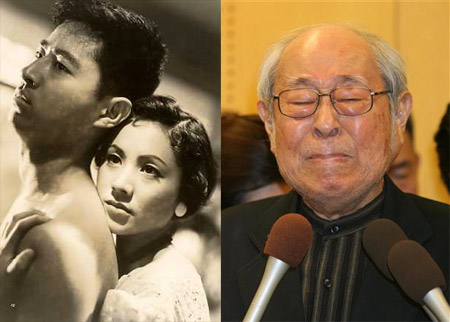 Actress Minamida Yoko died at a Tokyo hospital yesterday following a severe brain hemorrhage. She was 76. Her husband, actor Nagato Hiroyuki (75), spoke to reporters last night. “At 10:56am, my dearest wife, without saying goodbye…” was all he could say before becoming overcome with grief. It was just before he went on stage at the Meijiza theater in Tokyo that his wife of 48 years passed away. Minamida had just a couple of movie roles under her belt when she co-starred with the already veteran Nagato in “Taiyo no Kisetsu,” a huge hit that is best remembered today for launching the career of Ishihara Yujiro. The movie established the pair as the Nikkatsu studio’s star attractions, and Nagato was making as many as a dozen movies a year. The two made a couple more films together at Nikkatsu before marrying in 1961, quitting the studio and setting up on their own. Nagato’s big screen career has stretched to over 230 movie credits, while Minamida’s credits include “Portrait of Chieko,” which was nominated for an Academy Award in 1967. Both worked extensively on TV dramas and variety shows until recent years. Minamida began to show signs of dementia in 2005 and quit showbiz in 2006. Nagato cared for her at home, but she was hospitalized twice earlier this year. Her final collapse came last weekend and though she underwent surgery, she never recovered consciousness.