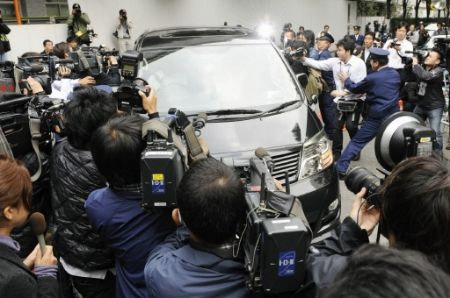 Yesterday Oshio Manabu (31) was the latest celebrity to appear at the Tokyo District Court. The singer-actor was arrested in early August and charged with the use of MDMA (ecstasy), and prosecutors have sought an 18-month prison sentence. Reading from his testimony, they revealed that he had admitted taking ecstasy several times over the last couple of years, usually while on frequent visits to the U.S. Oshio was also implicated in the death of a woman with whom he took the drug on August 2 at the Roppongi Hills apartment of a friend. At the time, Oshio called not for an ambulance or the police but his manager, in an attempt to figure out a way to conceal his own drug use. He then moved to another apartment in the building before police and paramedics arrived. He has not been formally charged in relation to the death of former Ginza hostess Tanaka Kaori (30) and he has insisted that she was the one who provided the ecstasy. But the fact that the situation was not reported to the authorities until several hours after the estimated time of death has left open the possibility of criminal or civil charges being filed. More than 2,200 people waited outside the court today hoping for a chance to get one of the 20 public gallery seats. The court’s verdict is due to be handed down on November 2.