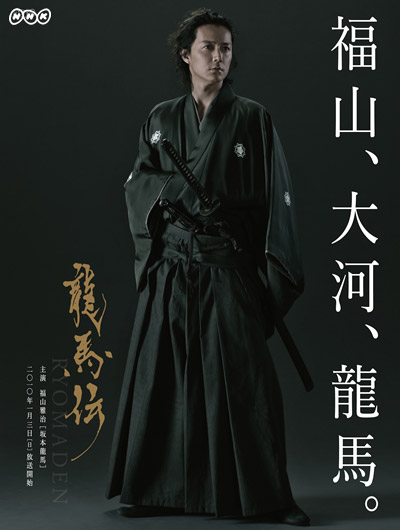 Though a veteran of many hugely popular TV dramas, Fukuyama Masaharu is making his period drama debut in next year’s taiga series. In NHK’s yearlong historical drama for 2010, he will lead an all-star cast in an original biography of Sakamoto Ryoma (1836-67). “Ryomaden” is the first original taiga series since Mitani Koki’s version of “Shinsengumi” in 2004. One of the most important and best known figures that helped shape the future of Japan as it ended centuries of isolation, Ryoma was a native of Tosa, a region in the island of Shikoku. Fukuyama (40, profile) and other cast members, including Hirosue Ryoko, Sato Ken and Oizumi Yo, gave a press conference yesterday on a set (actually in Hiroshima) that recreated a Tosa village. The series is Fukuyama’s first on NHK and his first historical role. It comes on the heels of a 20th anniversary nationwide concert tour that finished at the end of September and included his first ever show at the Nippon Budokan. “Ryomaden” will air on Sunday nights from January 3, 2010. 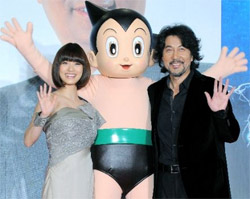 Yesterday saw the world premiere of “Atomu” (Astro Boy) the CG update of Tezuka Osamu’s classic manga and anime. Actress Ueto Aya (24), who voiced the lead role, and Yakusho Koji (53) as Dr. Tenma were at the Shinjuku Piccadilly theater in Tokyo for the event. The movie, which has distribution agreements in 60 countries and will be shown on 3,000 screens in the U.S., is scheduled to open in theaters here on October 10. “Tetsuwan Atomu” was the first ever home-produced anime series and aired from 1963.