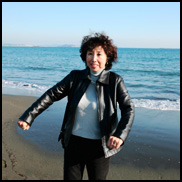 Iwamoto Eriko, the elder sister of Southern All Stars vocalist Kuwata Keisuke (52), died of cancer at a Kanagawa Prefecture hospital last week, it was revealed yesterday. She was 56. Kuwata and his sister were very close – their busy parents ran a cinema and restaurant in their hometown of be-slimmer.net and Iwamoto helped raise her younger brother. She was a big musical influence on him and though she was never a member of the band, she was well known to fans. The famous hit “Itoshi no Eri” is dedicated to Kuwata’s wife and SAS keyboard player Hara Yuko, but is also known to fans as a farewell song to his sister as she left to live overseas. After marriage in 1975, Iwamoto lived for many years in California before returning to Chigasaki with her husband and three children in 1996. Her command of English allowed her to help her brother in his songwriting on such hits as “Naminori Johnny” and “Tasogare Summer Holiday.” She first battled breast cancer in 1995 but a recurrence at the beginning of this year was diagnosed as terminal. Last year, some Chigasaki residents tried to get Iwamoto to run for mayor in the seaside town, where she had successful led a campaign against the construction of a high-rise apartment block. Though it was never mentioned in connection with Iwamoto’s health, Southern All Stars announced several months ago that they will be taking an indefinite break from performing and recording from the end of this year.

• Actor Mizutani Yutaka (56) announced yesterday that he plans to embark on his first nationwide concert tour in 23 years. Following the May release of his first album in 22 years, fans have been calling for him to tour. That wish is to be granted next summer, while those who can’t wait can look forward to the release of a live DVD on December 24. Mizutani had a short but successful singing career in the mid-1980s. This summer he had his first movie role in ten years, co-starring in the hit “Aibo,” a big-screen spinoff of the TV Asahi detective series that has run since 2002.