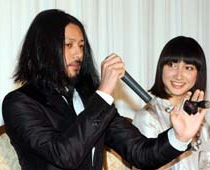 The media was caught off guard by yesterday evening’s press conference by top actor Odagiri Jo (31) and young actress Kashii Yuu (20). The two announced that after a relationship of two years they are planning to get married in the New Year. As well known for his radical fashion sense as for his various critically acclaimed movie appearances, a clearly nervous Odagiri sported his recent “late-period John Lennon” look. By giving a formal press conference rather than announcing the news by fax, and such revelations as Kashii’s strictly enforced 10pm curfew, the image of a young couple in love seemed to override the 11-year age difference between them. The media are referring to them using such terms as “seijitsu” (sincere, honest) and “junai” (pure and innocent love), a reaction perhaps to the many shotgun weddings and short-lived marriages that are common in the showbiz world. When asked about her ideal husband, Kashii said she’d like to marry someone like her own father, who she described as “very strict and stubborn”. Odagiri, who was raised by his mother, echoed his fiancee by saying he hoped to live up to that image. He added that he has seen Kashii as a future marriage partner since they started dating. Asked about the timing of the announcement, he said that he will be filming overseas at the beginning of next year and wanted Kashii to feel at ease while he is away. The two, who met on the set of the 2005 movie “The Pavillion Salamandre”, share the same birthday, February 16. That seems as likely a date for their wedding as any.

Odagiri got his break on TV in the title role of “Kamen Rider Uga” in 2000. He won a Japan Academy Award as best newcomer for the 2003 movie “Azumi”. He was romantically linked with actress Mizuno Miki (33), but they split in 2005. Kashii, whose grandfather is American, spent her elementary school years in Singapore. She started out as a fashion model before making her TV debut in Fuji TV’s hugely popular series “Waterboys” in 2003. She appeared in the first “Death Note” movie in 2006.

• Another wedding announcement came today from actress Aso Kumiko (29). Her management agency sent a fax to the media saying that she and stylist Iga Daisuke (30) tied the knot in Tokyo this morning.

• Finally getting a chance to take a honeymoon are actress Fujiwara Norika (36) and comedian Jinnai Tomonori (33), who tied the knot in February. The couple recently announced that they will both appear as judges on NHK’s “Kohaku Uta Gassen” on New Year’s Eve, and will head off for Mauritius shortly after.

• The latest trouble to hit the Gorgeous Kano Sisters is the arrest of the father of Kano Kyoko (45). Oyama Teruo (72) was arrested on the night of December 25 for threatening the two “sisters” with an umbrella in the basement of their central Tokyo apartment building. Oyama is said to have been looking for money, and no injuries were reported. The Kano Sisters are famous for their flamboyant displays of extravagant wealth.

• Glay vocalist Teru (36) and his wife, Puffy member Ohnuki Ami (34), were involved in a minor traffic accident earlier this month, it was revealed yesterday. Teru was making a right turn in Tokyo’s Aobadai area when he collided with a young woman on a bicycle. Police are planning to prosecute him for accidental infliction of injury.

• It looks like actor and renowned playboy Ishida Junichi (53) has patched things up with ex-girlfriend, talento Hasegawa Rie (34). They were first reported to be a couple in 1996 and they started living together in Tokyo in 2004. But a split at the end of that year brought them a lot of publicity, which both have used to good effect on the variety show circuit. Sources say that Ishida has acknowledged the rekindled relationship.