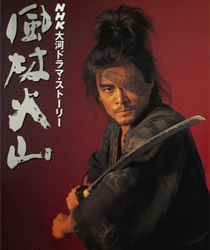 NHK’s taiga (historical drama) series “Fuurinkazan” finished its year-long run on Sunday with a disappointing audience rating. According to the firm Video Research, the series had an average rating for the year of 18.7%, peaking at 22.9% for the fifth episode back in early February. Sunday’s climactic episode only managed 18%. The numbers are in line with NHK’s audience trend of the last few years – 2005’s “Koumyo ga Tsuji” managed 20.9%, while last year’s “Yoshitsune” dropped to 19.5%. The decline is ascribed to factors such as a lack of interest among young viewers, despite the leading roles in both series being played by top young stars (Nakama Yukie in 2005 and Takizawa Hideaki in 2006). Fuurinkazan starred relatively minor stage actor Uchino Masaaki (39) as medieval warrior Yamamoto Kansuke, but also featured popular rock star Gackt in the major role of warlord Uesugi Kenshin (1530-78). The title of the series is an expression that translates as “as fast as the wind, as quiet as the forest, as daring as fire, and immovable as the mountain”.

• A classic late-night music show of the late 1980s is to make a one-night comeback. Talento Aihara Yuu (40), one of the original presenters of TBS’s late-night show “IkaTen”, returned from her home in New York, to record the special with Miyake Yuuji (56). The special will air on December 30. With the full title of “Miyake Yuuji no Ikasu Bando Tengoku”, the show featured a contest between 10 amateur bands every week, with the winner being named “IkaTen King”. Any band that won for five weeks running was promised a major-label contract. The show launched the careers of such bands as Flying Kids, Begin, Tama, and Blankey Jet City. IkaTen aired from early 1989 but despite its popularity it ran only until the end of 1990. During that time, two program staff were arrested for marijuana possession and there were claims of major labels trying to sign up bands behind the scenes.