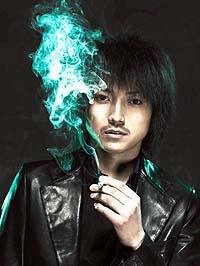 Popular young actor Fujiwara Tatsuya (25) is to take on the persona of a Japanese movie legend. In the ‘hard boiled’ thriller “Chameleon” the star of the “Battle Royale” and “Death Note” movies will play a role originally written for the late Matsuda Yusaku (1950-89) in 1978. The project has finally been realized by the original scriptwriter Maruyama Shouichi (59), who worked with Matsuda on several projects, and producer Kurosawa Mitsuru, the man who shaped Matsuda’s career and is executive producer for the movie. Directed by Sakamoto Junji (50), the movie started filming at the end of November. Fujiwara impressed the director with his forthright acting style and willingness to take physical risks. In one scene, he barreled down a flight of steps on a motorbike and completed filming covered in bruises. The movie is scheduled to open in theaters next summer, and distributor Toei is planning on turning the movie into a series.

• Kyogen actor Shigeyama Motohiko (32) got married on Christmas Eve, it was revealed yesterday. He and his 31-year-old wife are already living together. Shigeyama comes from a kyogen family and made his stage debut at the age of four. He is currently appearing in NHK’s morning drama series “Chiritotechin”, whose plot centers around the traditional comic storytelling of rakugo in Osaka.

• Talento Nitta Junichi (44) announced on his blog yesterday that he is married for the second time. He gave no mention of when he got remarried, but said that his new wife is the hair stylist for popular enka singer Yashiro Aki (57). He was previously married to former singer Hiroe Jun (40), with whom he had two children.

• Talento Suzanne (21) has been romantically linked with actor Yamamoto Koji (31). Today’s issue of weekly gossip magazine “Friday” includes photos of Suzanne leaving Yamamoto’s Tokyo apartment very early one morning in late November. True to her “o-baka” (stupid) image, she insists that Yamamoto was simply helping her study geography and history, while her management agency insists the two are just friends.

• Comedian Masuda Hidehiko (37) of the duo Masuda Okada revealed yesterday that became a father for the second time last week. At the time the baby was born, he was filming a special program to mark the 25th anniversary of the debut by former idol singer Hori Chiemi.

• International fashion model Anne (21) is to appear in the latest promo video from hip hop unit Home Made Kazoku. The video for “Oboeteru” was shot last week in popular date spots around Tokyo, including Omotesando and O-daiba. The daughter of Hollywood-based actor Watanabe Ken (48), Anne is one of the few Japanese fashion models to have established themselves on the world catwalk scene.