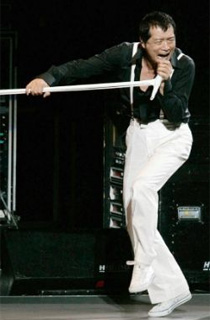 Rock legend Yazawa Eikichi (58) reached a new milestone in his long career on Sunday when he became the first musician to perform at the hallowed Nippon Bukodan for the 100th time. He was joined on stage by members of the Doobie Brothers, long-time friends who came to Japan just for the occasion. He first played the central Tokyo venue in August, 1977 and in recent years it has become an established practice to perform there in December. Yesterday he wore the same black shirt and white suit fashion that he had in the 70s and he kicked of the show with the same song, “C’mon Baby”. He thanked fans, musicians, crew and his own muscles for supporting him over four decades and gave the 10,000-strong audience a performance of two and half hours. In 1966, the Beatles were the first ever band to play the Budokan and it was their influence that led Yazawa to become a musician. He will extend his record run at the Budokan with two more shows this week.

• Veteran actor Tsugawa Masahiko (67) revealed on a documentary aired last night that he had recently been close to bankruptcy. The majority of his ¥600 million in debts were related to his struggling toy brand “Gran Papa”. Tsugawa was forced to sell his most valuable asset, the original Norman Rockwell painting “Extra Good Boys and Girls”. The famous illustration of Santa Claus planning his Christmas Eve route round the world, created for a December 1939 cover of The Saturday Evening Post, was auctioned for $2.17 million in New York at the end of November.

• Singer Hamasaki Ayumi (29) had to overcome mechanical problems at a “secret live” performance yesterday. She was at the Ikspiari shopping mall in the Tokyo Disney Resort filming a performance for her now annual NTV Christmas special. Just one song into the set, there were technical problems but rather than leave the gathered audience of 2,500 people waiting in the cold, Ayu went back on stage and did an acappella version of her hit “Seasons”.

• The sequel movie “Always Zoku San-chÃ´me no Yuhi” (Always – Sunset on 3rd St.) has done even better at the box-office than the 2005 original. In the 42 days since it opened, it has made ¥3.7 billion and been seen by 3.1 million people. Directed by Yamazaki Takashi, the heart-warming tales set in 1950s Tokyo star Yoshioka Hidetaka (37) and Horikita Maki (19).

• Johnny’s Jimusho have teamed veteran singer Kondo Masahiko (42) with young Johnny’s Jr. unit Question? Described as a rock band, Matchy With Question? have recorded “Mezasero! Yasei” as the ending theme for January’s new series of the popular anime “Naruto Shippuuden”. It’s the first anime song for Kondo, who marks 28 years as a singer on Wednesday. The new band are set to appear in his scheduled Budokan show next February 14.

• Popular vocal and dance unit Exile have shipped a million copies of their latest album “Exile Love” since its release last Wednesday. Sales have been helped by their recently completed nationwide tour and the inclusion of a bonus DVD that features comedian Okamura Takashi of the duo Ninety-Nine.