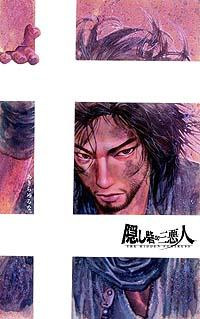 Popular manga-ka Inoue Takehiko (40) has created his first ever movie poster. Known for such hit manga series as “Slam Dunk” and “Vagabond”, he got the job of designing the poster for the upcoming movie “Kakushi Toride no Sanakunin”. Starring Arashi member Matsumoto Jun (24), the movie is a remake of the 1958 Kurosawa Akira classic. That film, known internationally as “The Hidden Fortress”, was a major influence on George Lucas when making the first “Star Wars” movie. Matsumoto said, “Inoue-sensei is a hero to my generation. I’m delighted to be connected with him through this movie.” The poster features Matsumoto’s character, Miyamoto Takezou (who did not feature in the original), staring out of his prison cell. The cast also includes Nagasawa Masami as Princess Yuki, Abe Hiroshi in the original hero role of General Makabe Rokurota (played by the legendary Mifune Toshiro), and Shiina Kippei as Takayama Gyoubu, the incarnation of evil. Directed by Higuchi Shinji, the movie is due for theatrical release on May 10.