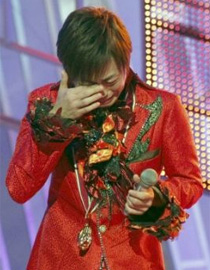 Enka singer Hikawa Kiyoshi (30) won a record 4th Grand Prix at this week’s annual Nihon Yusen Taisho music awards. The awards show, being held for the 40th time, took place at the TBS studios in Akasaka, Tokyo. Known as the “Prince of Enka”, Kiyoshi also won the award for most requested artist and thanked his (mostly middle-aged female) fans for his decade of success. He then sang a tearful version of his most famous hit, “Kiyoshi no Souran Bushi”, which won the award for most requested song. The award for best newcomer went to the female unit RSP.

The following day, Hikawa performed two shows for a combined 10,000 fans at the Tokyo International Forum. He went through six costume changes and 21 songs during the show. Referring to the previous night, he said that despite the fact that he recently turned 30, he’ll probably be known as the “Emotional Prince”.

• Lawyer and TV celebrity Hashimoto Touru (38) has finally announced that he is running in next month’s Osaka gubernatorial election. A regular on variety shows and the father of seven children, the Osaka native became famous on more “serious” variety shows such as “Sunday Japon” (TBS) and “Gyouretsu no Dekiru Houritsu Soudansho” (NTV). He is campaigning with the support of the ruling LDP party, and possibly quite a few celebrities. He is represented by the showbiz management agency run by Ohta Mitsuyo, wife of Bakusho Mondai comedian Ohta Hikari.

• Veteran comedienne Utsumi Keiko (85) underwent surgery last week for breast cancer. She has already left hospital and is recuperating at home. She plans to return to work on December 21, shooting an episode of NHK’s detective drama series “Keiji no Genba”.