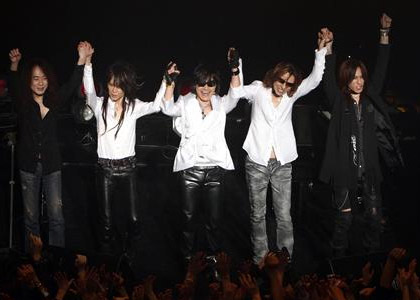 X Japan vocalist Toshi (44) held a “breakaway” concert at Akasaka Blitz in Tokyo last night. The show was largely to promote his newly released solo album “Bushi Japan,” but he was joined on stage by the other four members of X Japan and the emotional show also represented a symbolic break from Toshi’s troubled past. He recently divorced Wanku, the former idol singer Moriya Kaori and his wife of 12 years, though for much of that time she lived with the leader of a “self improvement” group that siphoned off all of Toshi’s earnings. The stress of that relationship caused him to lose his voice on occasion and even consider giving up music altogether. He will no longer perform solo or with Wanku and will concentrate on X Japan’s expansion into the U.S. market.

Last night’s show was a simple acoustic affair in front of about 1300 fans. In addition to songs from the new album, they performed X Japan standards such as “Endless Rain” and “Forever Love.” X Japan are due to perform at the Lollapolooza festival in August, but drummer and band leader Yoshiki dropped a hint that there may be a “warm up” show in Los Angeles. No further details were given.