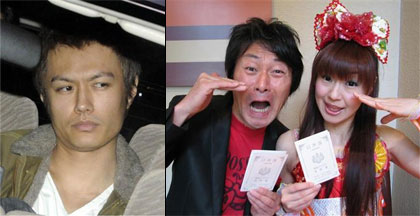 The Tokyo District Court yesterday rejected a bail application by former actor Oshio Manabu (31, photo left). he has been charged in relation to the drug death of Ginza bar hostess Tanaka Kaori (30) on August 2. Prosecutors say Oshio gave her the synthetic drug MDMA (ecstasy) in a friend’s apartment in Tokyo’s upmarket Roppongi Hills complex, but then left her to die after she went into a coma. Already handed a suspended prison sentence in November for the drug use, and indicted in December for supplying the drug to Tanaka, Oshio was charged on January 25 with failing to act to save her life.

Oshio’s upcoming trial will be the most high-profile case since the lay-judge system came into effect last August. His lawyers are said to be planning to enter a plea of not guilty. Oshio was released on ¥4 million bail after his first arrest in August.

A Comic Tale of Riches to Rags
Comedian Katsumi (46, photo right) has published a book about his financial struggles, he announced yesterday. The book “Shakkinboshi” includes details such as: how he turned ¥300 million in stock investments into debts of ¥170 million; the all-pink ramen restaurant that he and his wife and comedy partner Sayuri (40, photo right) drove to bankruptcy; the highly prized giant stag beetles that he was breeding but which a freaked-out Sayuri killed with bug spray; right up to his recent investment in 100,000 now almost worthless shares in Japan Airlines. Katsumi was advised to write the book by his comedy sempai (senior) Shimada Shinsuke (53). The book’s title is a pun of the Japanese words shakkin (debt) and kinboshi (dazzling victory).