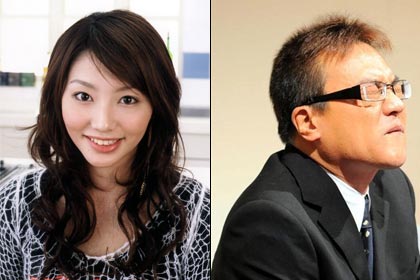 So what led talento Manabe Kaori (28, photo left) to pull out of a fashion show on Saturday at the last minute? Organizers of the bridal fashion show at the Tokyo International Forum said that Manabe’s management agency called them at about 2am the night before claiming that she was in poor health and would not be able to appear. In her place, the agency supplied the services of talento Fujisaki Nanako (32). Manabe was to be the star of the show and she graced the cover of a espana-med.com printed for the event.

The cancellation is the latest hiccup in a career that has been plagued by management problems. Her president of her former agency was arrested last year for tax evasion. Last summer she dropped out of a regular TV slot after her image was used without permission in a politician’s national election poster. And she is said to have filed to cancel the contract she signed with her current management agency.
Earlier story:
Avant Garde CEO Arrested (Aug. 26, 2009)

Kitano Makoto Ready to Bite His Tongue?
Talento Kitano Makoto (51, photo right) may be close to making a showbiz comeback. On extended leave of absence since last April, he has been the subject of several media reports suggesting a possible return to work in the near future. Long known for his sharp tongue, Kitano was on the brink of forced retirement last year following the latest in a series of inflammatory on-air remarks. The scandal brought an end to his “Makoto no Psychic Seinendan” radio show, which he had presented for 21 years. The Shochiku Geino management agency acknowledged at the weekend that his probation period has come to an end but said that there were no media jobs lined up for him for the foreseeable future.
Earlier story:
Kansai Comics In Trouble Again (Apr. 13, 2009)

It Wasn’t to Be for Anna
Barely a week ago Japan Zone recently reported the romance between single mother talento Umemiya Anna (37) and american football player Nakajima Yu (28). Well, it seems that the romance was all too brief. Umemiya wrote in an generally upbeat entry on her blog that she and Nakajima have broken up after just two months. “I still feel that it was a lovely encounter, and it was another lesson learned,” she wrote.
Earlier story:
Divorcee Celebs Go for Younger Men (Jan. 29, 2010)