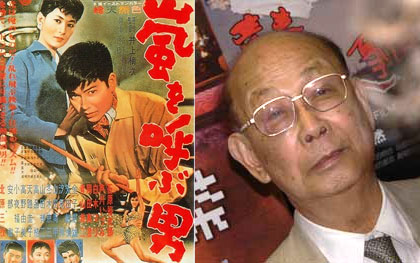 Movie director Inoue Umetsugu died on February 11 of a brain hemorrhage at a Tokyo hospital, it was revealed yesterday. He was 86. A graduate of Keio University, he joined the Shin Toei movie studio in 1947 and made his directorial debut in 1952. He later defected to Nikkatsu and made a series of movies with top star Ishihara Yujiro (1934-87), such as “Arashi wo Yobu Otoko” (poster above) and “Washi to Taka.” In 1958, he married actress Tsukioka Yumeji (87). Two years later he left the studio system but went to take his movie total to more than 100. In 1983, he made several movies featuring Johnny’s Jimusho heartthrobs, including remake of “Arashi…” starring Kondo Masahiko (45). After that he made only a couple of minor features in the late 1980s.

Kitano Makoto is Back
As reported on Japan Zone recently, talento Kitano Makoto (51) is going back on the air. His management agency announced on their website yesterday that he is scheduled to appear on a couple of shows in the Kansai region later this month. On February 20, he’ll make his first theater appearance since a charity show in 2004. And a week later, he’ll be a guest on the “Takajin Mune Ippai” show hosted by his friend Yashiki Takajin (60). Kitano’s mouth has got him into trouble many times over the years but a scandal last year nearly ended his career.
Earlier stories:
Celebs Bemoan a Broken Back and a Poison Tongue (Apr. 29, 2009)
It Isn’t Easy Being a Star (Feb. 8, 2010)

Two Showbiz Families United
Actor Wakayama Kiichiro (45) and actress Hitomi Ryo (29) are romantically involved, according to today’s issue of the “Shuukan Josei” magazine. They have been dating since joining the same management agency several years ago, and now live together in Tokyo. Both are minor celebrities best known as the children of famous actor parents. Their 16-year age difference comes as less of a surprise when you consider that Hitomi’s father, actor Uehara Ken (1909-91), was 66 when he married her mother at the age of 28. Wakayama comes from an even stronger showbiz pedigree – he is the son of movie stars Wakayama Tomisaburo (1929-92) and former Takarazuka actress Fujiwara Reiko (1932-2002), and the nephew of Katsu Shintaro (1931-97).