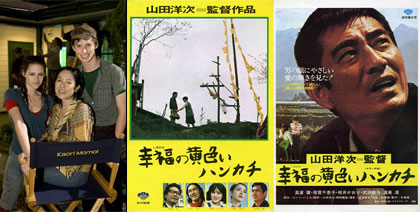 Actress Momoi Kaori (57) makes a special guest appearance in the U.S. indie remake of the classic movie that made her a star, it was revealed yesterday. On the one hand it’s just the latest take on a centuries-old theme, but “The Yellow Handerchief” is really an homage to the 1977 Yamada Yoji classic “Kofuku no Kiiroi Hankachi.” That movie featured established stars Takakura Ken (79) and Baisho Chieko (69) and won just about every movie award going that year, including a best supporting actress prize for Momoi. In the new version, William Hurt (59) plays the lead role of a man released from prison. After he filmed a scene with Momoi, who plays the owner of a hotel he stops at on his journey home, he was impressed enough with the Japanese star’s acting skills to comment, “That was awesome!”

Filming took place in Louisiana in 2007 and the movie debuted in early 2008 at the Sundance festival to lukewarm reviews. Directed by Udayan Prasad, it failed to find a distributor despite the presence of Oscar winner Hurt. But it also stars Kristen Stewart, who has has much more success in the “Twilight” movies, and was eventually picked up by Samuel Goldwyn Films in the spring of 2009. It hits U.S. theaters this month and is scheduled for release in Japan in the summer. 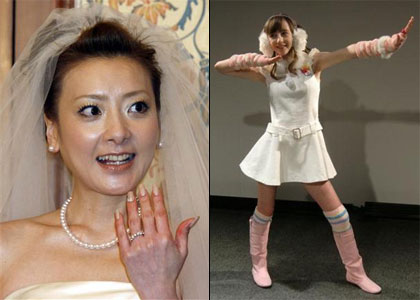 Talento and doctor Nishikawa Ayako (38, photo left) got married at the Hotel Okura in central Tokyo yesterday. She and social welfare company president Fukumoto Ajia (36) held a reception for about 400 invited guests. Former Yomiuri Giants and Pittsburgh Pirates pitcher Kuwata Masumi (41) was the master of ceremonies.

NEWS23 Announcer Married
Freelance announcer Okayama Yuko (30) wrote on her blog yesterday that she got married at the beginning of the year. A presenter on the TBS show “NEWS23,” she said she had been a bit embarrassed to make the announcement, but chose Valentine’s Day to do so. She said that because of her husband’s work, they will be leaving Japan before the summer to live for several years in Brazil. But she hopes to continue her broadcasting career.

Beckii Cruel Back in Japan
Teen YouTube sensation Beckii Cruel (14, aka Rebecca Flint, photo right) is back in Japan to promote her debut single and shoot a photo collection. An internet hit among Japan’s otaku and anime fans, Beckii is sure to enjoy commercial success with the single “Tsubasa wo Kudasai.” She released the song February 10 as Beckii Cruel and the Cruel Angels – the trio is made up of Beckii, 18-year-old French college student “Sara Cruel,” and 16-year-old British schoolgirl known as “Gemma Cruel.” Beckii performed to three songs and met with fans at at the Lazona Kawasaki shopping mall yesterday.