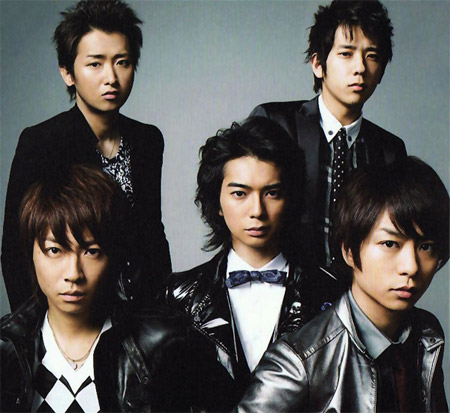 Arashi took just about every prize going at the 24th Gold Disk Taisho awards yesterday. Including the top honor of being named as Artist of the Year, the Johnny’s Jimusho idol group won a total of 10 categories, the most ever. Other awards included Album of the Year (“All the Best! 1999-2009”), Single of the Year (“Believe/Kumori Nochi Kaisei”) and Best Music Video (“Arashi Around Asia 2008”). Members Ohno Satoshi, Aiba Masaki and Matsumoto Jun were on hand to pick up the 10 trophies. Aiba joked that there were so many that they should give them away to fans in a lottery. The awards are given out annually by the Recording Industry Association of Japan, and are based on sales figures. In 2009, Arashi sold 2.45 million singles, 1.77 million albums, 1.14 million videos/DVDs, and 3.07 million downloads for an accumulative total of 8.42 million. The New Artist of the Year, for the top-selling artist who debuted in 2009, went to the band Hilcrhyme.

The main award in the overseas music category went to The Beatles, based mainly on last year’s sales of their remastered albums, while Michael Jackson’s “This Is It” was Album of the Year. Guitarist Slash took Single of the Year for the song “Sahara,” which featured B’z vocalist Inaba Koshi.