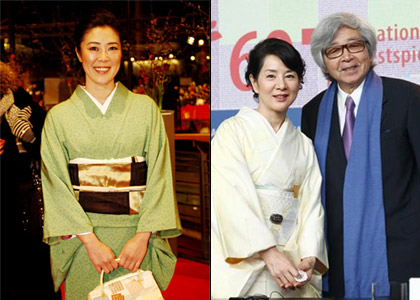 Japanese women made a strong showing at the Berlin International Film Festival, which closed on Saturday. Actress Terajima Shinobu (37, photo left) won the Silver Bear for Best Actress for her role as Shigeko in “Caterpillar.” Directed by Wakamatsu Koji, the film is based on the 1929 short story of the same title by mystery writer Edogawa Rampo. Terajima is the first Japanese to win the best actress award in 35 years, and follows in the footsteps of Hidari Sachiko (1964) and Tanaka Kinuyo (1975).

The festival came to a close with a screening of Yamada Yoji’s “Otouto” (Little Brother). Yamada (78, photo right) and star Yoshinaga Sayuri (64, photo center) were in attendance and said it had been a “great honor.” Reporters questioned the choices made by Yoshinaga’s character, a woman who gives everything to support her family, sacrificing any kind of a life for herself. But the quintessential Japanese actress replied, “The heroine makes a choice to support her children and younger brother. I think it’s admirable.” Also shown at the festival was Nakamura Yoshihiro’s “Golden Slumber,” which starred Sakai Masato, Takeuchi Yuko, and Yoshioka Hidetaka.